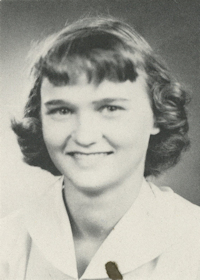 Graveside service will be at 10 a.m. Tuesday at the Morrison cemetery for Shirley Josepliine Sisco, 48, Morrison, who died Sunday at Stillwater Medical center.

Officiating will be Rev. Larry Christy, Morrison. The cemetery is located a mile east of Morrison, a half south and a quarter east. Burial will be under direction of Strode Funeral home.

Memorials may be made to the Arthritis Foundation at Oklahoma City.

Born April 12,1940, at Pawnee, she was the daughter of Nova and Nettle O’Neal Maggart. She was married Sept. 22, 1964, at Arkansas City, Kan., to Bill R. Sisco, who survives. She attended Pleasant View and Olive Hill rural schools and attended Pawnee high school. She was a graduate of Perry high school.

Mrs. Sisco had lived at Burbank and Weeletka, Okla., and moved to Morrison in 1975. A member of the Bible Baptist church at Pawnee, she had worked on the farm with her husband.

She was preceded in death by her parents, her grandparents, one sister and one granddaughter.