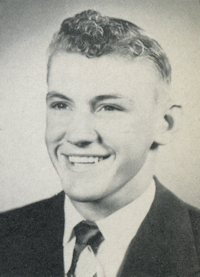 Wake service will be at 7 p.m. Sunday at St. Peter’s Catholic church at Woodward. Funeral mass will be at 9;30 a.m. Monday at the church. Rev. Mike Wheelahan, associate pastor, will officiate. Burial will be at 3 p.m. Monday at St. Rose of Lima Catholic cemetery at Perry under direction of Stecher Mortuary of Woodward.

Skalenda was born at Perry Aug. 9, 1937, the son of William J. and Clara Skalenda. He was a graduate of Perry high school and attended the University of Oklahoma. He served three years in Germany with the United States Army.

In addition to Mrs. Skalenda, survivors include one son, Pat, and two daughters. Tammy and Toni, all of Woodward; and three brothers, A. C. Skalenda, Wagoner; Ron Skalenda, Hobbs, N.M.; and Bernard Skalenda, Lebanon, Mo.

Memorials may be made to the Oklahoma Medical Research Foundation for heart research.