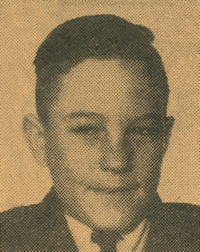 – 15 year old son of Mr. and Mrs. Riley A. Smith, was born August 14, 1924 in Perry. In addition to his schooling in Perry he attended the Lone Elm school near here.

Swimming, softball, hunting and tennis are his hobbies.

He plans to attend Oklahoma A. and M. college next year and study commerce.

Riley A. Smith Jr. of Lawton, 49, a native of Perry, was found dead at his home in Lawton by his wife about 6 p.m. Friday. He died of an apparent heart attack.

Funeral will be at 2:30 p.m. Monday in Greenlawn Funeral home chapel of memories at Lawton. Burial will be in Sunset Memorial Gardens cemetery at Lawton.

He was a veteran of World War II, entering the Navy in 1943 and serving on a destroyer in the Pacific theater of operations.

Smith was a member of Central Baptist church in Lawton and the Masonic lodge in Shawnee.