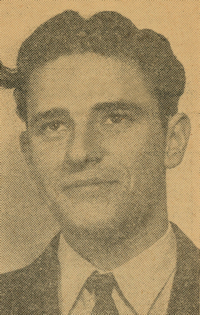 ﻿- 20-year-old son of Mr. and Mrs. John Endres, attended the Wingspring school southeast of Perry and St. Joseph’s academy in Perry before enrolling in the local public school system.

He was born November 2. 1920, in this city and has been active in the local F. F. A. chapter and in the high school mixed chorus. He took part in the junior class play, the F. F. A. play and the one-act play “Lost and Found,” the 1941 senior play and the 1940 radio mystery. Frank has won awards in track, mixed chorus, junior play and orchestra.

Hunting, fishing, photography and horseback riding are his favorite hobbies.

He has not definitely decided whether to take a special course in radio, art or music in college, but says he may compromise by taking all three.

Memorials may be made to Catholic Charities in care of Brown-Dugger Funeral Home.

He served in the U.S. Army Air Corps during World War II.

He was preceded in death by his partents, one brother and two sisters.