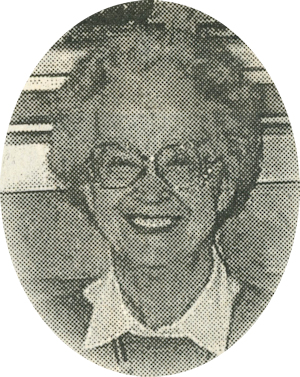 ﻿Shirley Ann Williams, 74, of Perry, Oklahoma was the daughter of Rudolph Kobes and Reba Eunice (Hogzette) Kobes. She was born May 2, 1928, in Perry, Oklahoma and died at 10:45 a.m. Wednesday, January 29, 2003, at Baptist Medical Center in Oklahoma City, Oklahoma.

She attended Perry schools and was a graduate of William Woods College.

On August 21, 1949, she and Joe Williams were married in Perry, Oklahoma. Shirley worked at the state highway department prior to becoming an employee of Exchange Bank and Trust Company. She retired as Vice President of Exchange Bank in 1987 after 37 years of employment.

Funeral services will be at 10:00 a.m. Friday, January 31, 2003 at the First Presbyterian Church. Rev. Tim Boggess will officiate. Interment will be in Grace Hill Cemetery under direction of Brown-Dugger Funeral Home. Memorials may be made to the charity of the donor’s choice.

She was preceded in death by her parents, Rudolph Kobes, Reba Warren and Bud Warren; two sons, Dale and Max, one sister, Marian White and two grandsons.