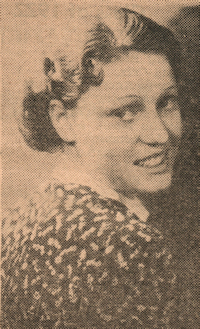 ﻿﻿- daughter of Mr. and Mrs. John Endres of Perry, was born in Perry on April 11, 1919, and attended the elementary grades in the St. Joseph Academy. She attended high school in Perry. Following graduation she has planned to take a beauty course.

She was the daughter of John and Edna (Manville) Endres. She was born in Perry April 11, 1919 and attended St. Joseph’s Academy in Perry and was a graduate of Enid Beauty School. On Feb. 14, 1946, she and John “Mack” McFadyen were married in Oklahoma City.

She had worked as a beautician in Perry and Oklahoma City and was a member of The Catholic Church of St. John the Baptist of Edmond.

She was preceded in death by her husband in October 1996; her parents, one brother and one sister.

Memorials may be made to Catholic charities.