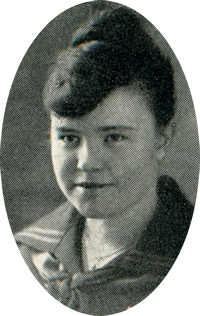 “Chinese fashion, everything in opposition.”

Mrs. Nina Neal, city housewife and Perry native, died at 10:30 a.m. Friday in Perry Memorial hospital, where she was admitted shortly after 9 a.m. following a hemorrahage while taking her mother to Good Friday services in the Christian church.

Arrangements for final rites will be announced by the Newton funeral home.

She was born in July 1900, the daughter of Mr. and Mrs. C. S. Thomason, pioneers of the Cherokee Strip, on the family homestead eight miles north and one east of Perry.

Mrs. Neal graduated from Perry high school, and had spent all her life in this community. Her husband, Roy, is an employee of the Perry water and light plant. She was a life-long member of the First Christian church, and took an active role in affairs of the church. She also was a long-time member of the American Legion auxiliary.

In addition to her husband of the home, 1019 Sixth street, and her mother, survivors are a daughter, Mrs. Helen Marie Lewellen, Perry; a brother, Carl, Perry; three grandchildren; and a niece, Mrs. Barbara Coffey, whom the Neals reared.

Her father preceded her in death.