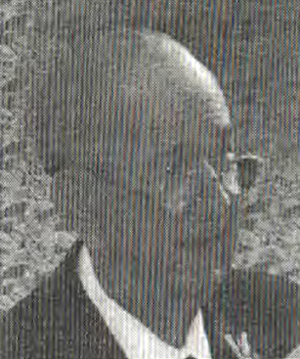 Architecture will be the interest of Earl Raymond Bechtold Jr. after the war. He is now enlisted in the nave V-12.

Earl Raymond Bechtold, 79, of McKinney, TX, was called home to his Savior Friday, March 4, 2005, at Homestead of McKinney Nursing Center.

After serving in the Naval Air Corps during WWII, he returned home to attend Oklahoma State University. There, he met Bettye June Annis and the couple married August 30, 1946, in Stillwater, Okla.

The pair owned and operated Tamac Pottery Company in Perry Okla. for a number of years until Raymond accepted a management position with Ditch Witch, Inc. and relocated to Phoenix, Ariz.

Upon retirement, the Bechtolds moved to Corvallis, Montana, where Raymond manufactured handmade furniture and custom handbags while Bettye operated the sales outlet.

The Bechtolds came to McKinney in 1995 to be nearer to family and soon became active members of First Baptist Church.

Raymond and Bettye also invested a great deal of time with other members of the Golden Heirs Sunday School class.

Visitation with the family will be held at 2 p.m., Sunday, March 6, 2005, at Charles Smith and Son Funeral Home of McKinney. Friends and family will celebrate Raymond’s life at 10 a.m., Monday, March 7, 2005, in the Sanctuary at First Baptist Church of McKinney under direction of Pastors Jeff Warren and Randy Morlan. Interment will be held at 2 p.m., Tuesday, March 8, 2005 at Grace Hill Cemetery in Perry, Okla. In lieu of flowers, memorials may be made to the Caregivers Ministry at First Baptist Church of McKinney.