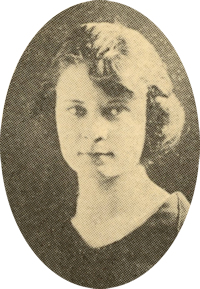 “Tis nice to be natural when you are naturally nice.”

Graveside services will be at 2 p.m. Thursday at Grace Hill cemetery for Blanche Mae Gallup, 89, of West Plains, Mo., who died at 12:15 p.m. Monday, May 4, 1992, in West Plains Health Care center. Funeral will be at 2 p.m. May 6 at the Rose Chapel of the Robertson-Drage Funeral home at West Plains.

Before her retirement she was employed as a telephone operator for Southwestern Bell. Mrs. Gallup was a Baptist and attended the First Baptist church of Koshkonong, Mo., for 15 years.

She was preceded in death by her parents, her first husband, Carl McGill; her second husband, Eddie Gallup; one son, Duana McGill, five brothers and two sisters.