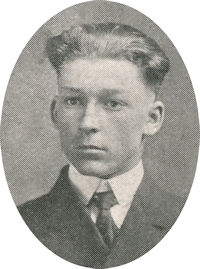 “The biggest tease in his class for his size.”

Funeral will be at 2 p.m. Wednesday at the chapel of Poteet Funeral home of Pawnee. Rev. Mike Walker will officiate. Burial will be at the Lawnview cemetery, Lucien.

Brock had been employed in the construction business in Oklahoma and California. He farmed northwest of Perry until moving to Pawnee in 1978.