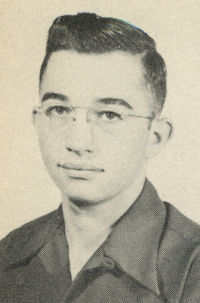 Services will be at 2 p.m. Tuesday in the Newton chapel for Billy Ray Mills, 34, son of Mr. and Mrs. H. G. (Buster) Mills, 1008 Fifth street, who was fatally injured about 2 a.m. Sunday in a two-car head on collision near Graham, Texas. Mills was one of three men killed in the crash.

Rev. H. E. Alsup, pastor of the First Baptist church, will officiate and burial will be in Grace Hill cemetery.

Mills, a construction engineer, had been employed in oil field work in Oklahoma and Texas. He was born Sept. 3, 1928, in Perry, and graduated from high school here in 1948. He was a member of the First Baptist church.

He was married June 7, 1950, in Oklahoma City, to the former Donna Rudolph of Perry. His wife is among the survivors. Their home is in Odessa, Texas.

In addition to his wife and parents, survivors include a son, Jon, and two daughters, Jenny and Jerri, of the home in Odessa; and a brother, Dick, Perry.