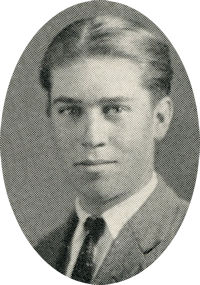 Funeral services will be at 2:30 Wednesday afternoon in the First Baptist church for Spurgeon Charles Adams, 52, who died Saturday at his home in Alvin, Texas, following a heart attack suffered six weeks ago.

Rev. H. E. Alsup, pastor of the church, will officiate and burial will be in Grace Hill cemetery. Masonic graveside services will be conducted.

Adams was born April 23, 1907, at Loretto, Ky. He came to Noble county with his parents, the late Mr. and Mrs. E. H. Adams, and lived on a farm northeast of Lucien. He moved into Perry with his parents in 1920 and was graduated from Perry high school in 1926.

He was a member of the 1925 football team which won the northwest conference and also attended Oklahoma State universtiy at Stillwater before entering oil field work which he followed until his death.

He was a 32nd degree Mason and a Shriner.