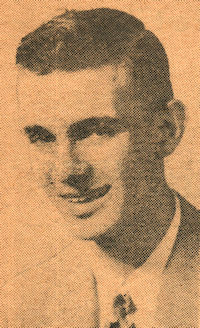 – son of Mr. and Mrs. J. M. Abel of Perry, was born in Guthrie on May 5, 1918 and attended the elementary grades in Piedmont, Mo. and Perry. He attended high school in Perry. During his high school career he was in the band and orchestra. Following graduation he expects to play in an orchestra or attend a music school.

﻿Funeral services will be held at 10 a.m. Saturday at the Delhomme Chapel of the Flowers for W. E. (Wes) Cole, 68, who died at Our Lady of Lourdes Regional Medical Center Thursday at 3:10 a.m.

The Rev. St. Clair H. Bower, retired, will officiate. Burial will be at Fountain Memorial Gardens and Mausoleum.

Mr. Cole was a native of Guthrie, Okla., the son of the late Foy Starr and the former Viola M. Cole. He was transferred to Lafayette from Edmond, Okla, by SOHIO in 1948 and retired in 1981 as sales manager for NTC of Lafayette. During his retirement years he was owner and operator of Natalies Antiques and with his daughter Jan operated Alencon Antiques.

He was a veteran of World War II. He was a member of the Oklahoma National Guard in 1940 which later became the 45th Thunderbird Division. He was discharged a first lieutenant.

Survivors include his wife, the former Delores Friend of Lafayette; a daughter, Mrs. J.H. (Jan) Needham of Lafayette; a sister, Mrs. Gayle Marie Cole of Wichita, Kan.; a brother, Gordan Lilly Abel of Edmond, Okla; and a granddaughter.