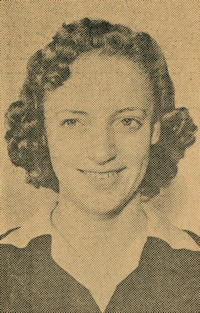 She was a member of the play cast during the junior and senior years. She had parts in several one act plays and has taken part in all the operettas given by the high school.

Hobbies are sports and playing the piano.

She expects to enter some college this fall.

She was born on November 14, 1923 in Perry, Oklahoma, the daughter of the late Ernest P. & Florence (Branen) Moore.

Betty worked as a bookkeeper for the Civil Service in Oklahoma during WWII, the Edwardsville High School, and then for Kelly Girl Temporary Service in Decatur, Illinois, retiring in 1982.

She married Eugene “Gene” Koenig on January 26, 1945 in Edwardsville. He survives.

She is also survived by one daughter, Lisa Lee Husky and husband Pete of Troy, Illinois; one granddaughter, Michaela Lee Reid of Troy, and one brother; E. Paul Moore, Jr. & wife Betty of Ballwin, Missouri.

Betty was a graduate from Perry High School and Northern Oklahoma Junior College in Tonkawa, Oklahoma. She was a member of St. John’s United Methodist Church in Edwardsville, where she served over the years as a communion steward, a Sunday school teacher, and a choir member.

There will be no visitation or services; she will be cremated according to her wishes.

A private burial will be held at Jefferson Barracks National Cemetery in St. Louis, Missouri.