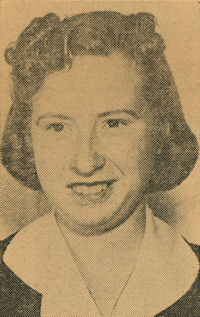 She was born at Bar-L, and has attended Perry schools all her twelve years of schooling.

Miss Cobb is a member of the Queen Esther circle of the Methodist church and plays in the Perry high school band, in which she has received an honor. Her hobby is collecting gopher matches.

She was a member of the cast of characters in the sophomore class play. Her plans for the future are indefinite.

The funeral for Oneita Wilson, 82, will be 10 a.m. Wednesday at First Baptist Church in Cherokee with the Rev. Tom Cooksey officiating. Burial will follow at Cherokee Municipal Cemetery with arrangements by Lanman Funeral Home, Inc. of Cherokee. Visitation will be today from 2 to 6 p.m. and Tuesday from 10 a.m. to 6 p.m. at the funeral home.

She was born June 16, 1923, in Marland to Ralph Henry Cobb and Mary Elizabeth Ehler’ Cobb. She died May 26, 2006, in Enid. She graduated from Perry, High School and married Robert Wilson on June 3, 1943, in Cherokee. She worked as a bookkeeper at Farmer’s Co-op for 41 years. She was a member of First Baptist Church in Cherokee and a member of Eastern Star. She was a Girl Scout leader and helped at Cub Scout camps and the Boy Scouts Explorer Post. She was a volunteer for Meals on Wheels and Ministerial Alliance Thrift Shop.

She was preceded in death by one sister and one brother.