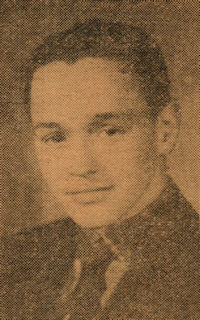 – son of Mr. and Mrs. Perry Charmichael of Perry, was born in Webb City, Mo., on August 25, 1919. He attended the elementary grades in Tulsa and Ardmore, Okla and attended high school in Perry. During his high school career he was a member of the band, orchestra, wrestling team and Nation Honor Society. Following graduation he expects to atten a university.

Cmdr. Carmichael was born in Webb City, Mo., August 25, 1919, and lived in Oklahoma until he entered the U.S. Naval Academy in 1939. After graduating in the class of 1943, Cmdr. Carmichael was assigned to the Battleship U.S.S. South Dakota, which went directly to the South Pacific. He received the Purple Heart for wounds received in the third battle of Savo Island.

Cmdr. Carmichael went through flight training and received his wings in Pensacola in 1945. He flew multi-engine aircraft for the remainder of his naval career. Pensacola was chosen for retirement after having had four tours of duty in the area.

After retirement, he spent many hours in volunteer work including work at the Pensacola Better Business Bureau, NAS Retired Affairs and as a Red Cross Volunteer in the Physical Therapy Clinic at Pensacola Naval Hospital.

Graveside services will be at 10:15 a.m. Tuesday, July 14, 1992, in Barrancas National Cemetery with Chaplain Leonard E. Markham officiating. In lieu of flowers, contributions may be made to the American Cancer Society or to a charity of choice.