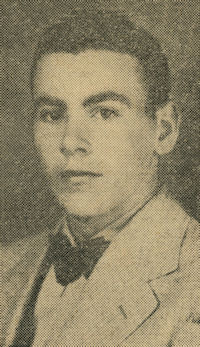 – son of Mr. and Mrs. J. H. Vandenberg of Perry was born in Perry on Aug. 30, 1920, and attended the elementary grades in Perry and high school in Perry.

John grew up in Oklahoma, graduated from Oklahoma State University, and served in the U.S. Army in the Pacific Theatre during World War II.

After the war, he joined Pan American Oil (later Amoco) as a chemical engineer. Over the years, he held supervisory and management positions in Louisiana, Wyoming, Houston, and Calgary.

John met and married his wife of fifty-seven years, Lucille, in Jennings, Louisiana.

After his retirement from Amoco in 1981, he began an active and lengthy volunteer career with the Houston Golf Association, where he enjoyed many junior golf outings and the annual Houston Open Golf Tournament.

John was preceded in death by his parents; and sister, Virginia.

A private family memorial will be held at a future date. In lieu of flowers, the family requests that memorials be made to the Houston Golf Association Junior Golf Program.