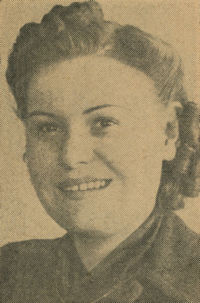 – the outgoing yell leader of the Red Hots. She has held that post for the past four years. Besides she was candidate for band queen for two years.

She has worked in a beauty parlor during her school term. Katherine is under the guardianship of Mr. and Mrs. J. C. Cain of the Cain Hotel. She was born in Ponca City and is just 16 years old.

She likes to collect pictures for a hobby.

The daughter of Mr. and Mrs. Charles Lessert, she was born July 4, 1922, in Ponca City, OK. After graduation from Perry high school in 1939, she attended one year of college.

She was the first female manager for a large grocery store chain in Houston at the age of 19. A consummate sales person, her greatest achievement was working as International Sates Manager for Penny Rich Bras in Dallas in 1969. In 1970 she returned to Oklahoma City where she owned and operated Kathryn’s Bed and Bath Store until 1987.

She was a true Oklahoman, extremely proud of her Osage heritage, and a member of the Catholic Church.

Living life to the fullest she traveled extensively in the U.S. and had many good friends.

She is survived by a daughter, Rena J. Parker and son-in-law, Zack A. Parker; grandchildren, Charles Warren Lessert Parker and Kathryn Marie Parker.

She was preceded in death by a brother, Bud Lessert and her mother, Rena Lessert.

Services were at 11:00 a.m. Tuesday at Smith & Kernke Funeral Chapel with interment at the Memorial Park Cemetery in Oklahoma City. Memorials may be made to donor’s choice.