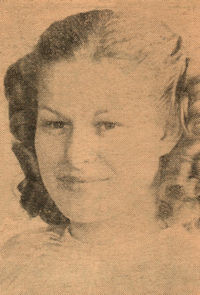 ﻿- has combined beauty, musical talent and a pleasing personality to make one of the most successful careers of this year’s graduating class. She was a member of the band for six years and in the
orchestra for three years. She was in the senior play. She was football queen, secretary of the band and secretary of her home room.

Doris has worked at various business firms and at the theaters during the past four years.

She plans to go to college and further her study of music and enhance her knowledge with a course in drama. She likes to swim and adds that to her hobbies of music and drama.

She is the daughter of Mr. and Mrs. E. R. Gregory of 102 Cedar street and was born in Wichita, Kans., in 1921. She attended only the Perry public schools.

﻿Doris I. ‘Dodi’ Brookhart, 81, of Siloam Springs, Arkansas, formerly of Perry, Oklahoma, was the daughter of Earnest and Winnie Gregory. She was born July 12, 1921, in Wichita, Kansas and died Friday, January 10, 2003, at her son’s residence in Jacobstown, New Jersey.

She was a member of the Northwest Arkansas Gem and Mineral Society and was a volunteer at the Manna Center.

She had resided in Siloam Springs since 1974.

Survivors are a son and daughter-in-law, Rev. Mark and Lynn Brookhart, of Jacobstown, New Jersey; a daughter and son-in-law, Constance E. and Richard Wylemski, of Murphy, North Carolina; one sister, Regina Thorman, of Van Buren, Arkansas; and nine grandchildren.

Her parents, Earnest and Winnie Gregory, her husband, Leon E. Brookhart, and brother, Walter Gregory, preceded her in death.