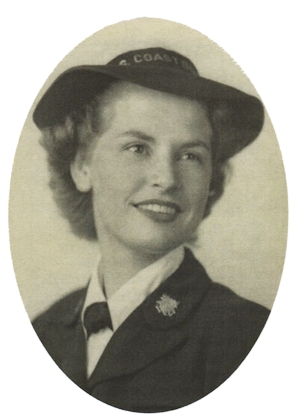 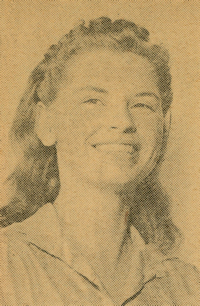 She is interested in basketball and softball. Her hobby is collecting pen pals and knick knacks.

After graduation, she plans to enter a beauty culture school

Jane was a 1941 graduate of Perry High School. On July 2, 1941 she married William Nordean Davis, better known as Dean. She served in the U.S. Coast Guard from 1943-1945. Jane worked for the Selective Service as a Draft Board Clerk and for the Soil Conservation Service. She retired from the Selective Service on July 1, 1970. Jane was a member of the First Presbyterian Church and the VFW Auxiliary.

Graveside services will be 10:00 a.m. Monday, July 7, 2003 at Grace Hill Cemetery. Rev. Tim Boggess will officiate. Services are under the direction on Brown-Dugger Funeral Home.

Memorials may be made to the Caring Hands Hospice in care of Brown-Dugger Funeral Home.

She was preceded in death by her husband, Dean Davis on September 29, 1987; her infant son, Robert Dean “Bobby Dean” Davis on May 26, 1954 and her parents, Earle and Anna Bell Fyffe and three brothers, Wallace Fyffe, Jack Fyffe and ElRay Fyffe.