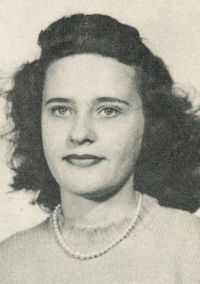 Jo Anne was born July 20, 1929 in Perry, Oklahoma to Theodore and Elva Kruse. Her parents preceded her in death.

Jo Anne graduated from Perry High School where she was a member of the Perry Maroon Band. She graduated from Oklahoma A & M, now Oklahoma State University, with a Bachelor of Science in Elementary Education and Home Economics. She began her 31 year teaching career in Pawhuska, Oklahoma.

Jo Anne married James W. Jim Waldrip in Perry, Oklahoma on December 20, 1952. Their first residence was at Scott AFB, near Bellville, Illinois. In 1954, Jo Anne accompanied her husband to Muskogee and Ponca City, Oklahoma, where he played minor league baseball. The couple moved to Roswell in 1955.