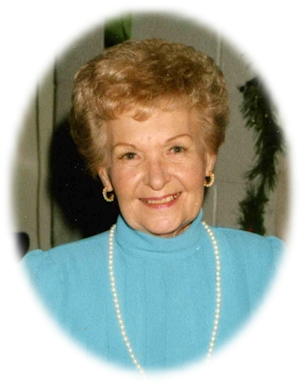 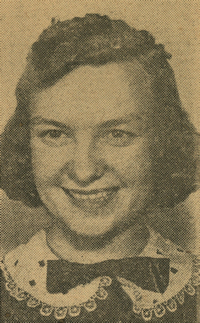 – age 17 years, daughter of Mr. and Mrs. J. M. Hopper of Perry, was born at Wirt, Okla., and attended school at Purcell and Stillwater before moving to this city with her parents, three and one-half years ago.

She has been vice-president of her home room during the junior year, and a member of the student council that same year. She also belongs to the Order of Rainbow and Queen Esther.

Loleta appeared in both the junior and senior plays, and has taken part in mixed chorus and band for six years. She received a student council honor pin and received a band letter for four years’ service.

Loleta played this past year in the saxophone quartet at the tri-state meet and had played in the same quartet for two years prior to that.

She plans to attend a business school next year.

Lou worked as a legal secretary before retirement. She enjoyed playing golf, playing bridge, making candy and ceramics and spending time with family and friends.

She was a member of All Souls Episcopal Church and a long-time member of the Twin Hills Golf and Country Club.

Memorials may be made to the American Cancer Society, the American Heart Association or the Oklahoma Medical Research Foundation in care of Brown-Dugger Funeral Home, 1010 N. 7th Street, Perry, Oklahoma 73077.

In addition to her husband, B.C., she was preceded in death by her parents, one brother and one sister.