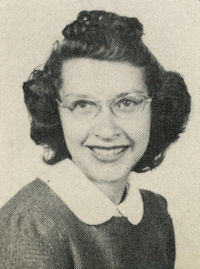 A memorial service will be at 1:30 p.m. Wednesday, St. Philip Presbyterian Church, 745 W. Pipeline Road, Hurst. In lieu of flowers, her memory may be honored with a gift to the Alzheimer’s Association, 4144 North Central Expwy., Suite 750, Dallas 75204.

Kaye was a native of Battle Creek, Mich., and also lived in Perry, Okla., before moving to Texas in 1949.

She was an honors graduate of Perry High School and also at Oklahoma College for Women and the University of North Texas, where she received her bachelor’s and master’s degrees in library science. Kaye worked as a librarian at General Dynamics and also for the Fort Worth Public Library before settling at L.D. Bell High School in 1956.

She was its first librarian and was responsible for setting up the library and many other libraries in the H-E-B school district, and influenced hundreds of students who used the library. She also substituted and worked as a volunteer for the H-E-B library system. She retired in 1993 after 37 years of service Kaye was a member of St. Philip Presbyterian Church and a member of the Beta Sigma Phi sorority.

Her hobbies were traveling by plane or by motorhome, playing bridge, knitting and enjoying her grandkids.

She was preceded in death by Thomas F. Munden, her husband of 45 years; and her father and mother, Chet and Margaret Stoughton.

Survivors include her daughter, Mindy K. Munden of Euless; her sister, Carol L. Stuard of Eastland County; her grandchildren, E.G. Perkins and Rachel Vanglish; and several nieces and nephews.