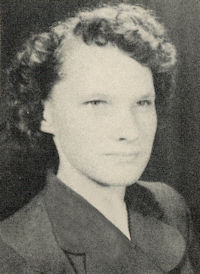 She was born Oct. 20, 1930 to John Henry and Evelyn Pearl (Copeland) Edgar in Lincoln, KS. She graduated from Perry high school in 1949 and he University of Oklahoma in 1953.

On December 31, 1955, she and Lewis Mace were married in Kinsley, KS. They owned Mace Tire and Oil for 44 years. He preceded her in death.

She also taught Typing, Bookkeeping, Shorthand, Business, English and Aeronautics. Mrs. Mace held the distinction of being the first lady in the state of Kansas to receive a commercial pilots license and multi-engine pilot’s license in 1970.

As an avid musician she played the piano and organ, and multiple other instruments. She attended the First United Methodist Church, was the organist for years, and played in the bell choir.

Funeral services will be at 10 a.m. on Saturday, April 11, 2015 at the First United Methodist Church in Johnson with Pastor Richard Fitzgerald presiding. Burial will follow at the Stanton County Cemetery in Johnson. Memorials are suggested to the Stanton County Long Term Care Unit in care of Garnand Funeral Home, PO Box 715, Johnson, Kansas 67855.