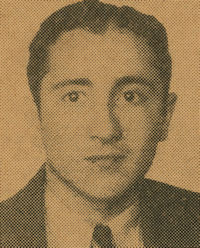 He was a member of the Perry high school wrestling squad this year and has wrestled in other schools before coming here.

Rudolph was a member of the student council this year. His hobbies include collecting stamps, coins, match covers and he is interested in all sports.

Next year he plans to attend the University of Oklahoma in Norman.

Zorba was born in Healdton on July 30, 1922, and had lived in the Three Sands, Tonkawa and Ponca City communities prior to moving to Perry in 1940. He attended his senior year of high school in Perry.

After enrolling at the University of Oklahoma, Zorba joined the United States Army. He served in the South Pacific through 1944. After military service, Zorba re-entered OU in 1945 and graduated with a pharmacy degree. He frequently filled in for local pharmacists Woody Foster, Monte Jones and A. J. Bontrager while also employed in the Zorba family clothing store.

On Oct. 9, 1960, he married Twyla Johnston of Oklahoma City. Zorba purchased the family store from his father in 1964 and continued that business until he retired in 1987.

Zorba was active in civic endeavors while operating his business. He had served as secretary of the American Petroleum Institute, and as a member of various city committees, the Perry Chamber of Commerce and the administrative board of the First United Methodist church. He also was a member of the Perry Lions club.

In addition to his wife, of the home, survivors include one daughter, Judi Zorba, Dallas, TX; one son, Michael Zorba, Tempe, AZ; a brother, Jack Zorba, and a sister-in-law, Joyce, of Stillwater.

Funeral will be at 2 p.m. Friday at the First United Methodist church. Rev. Cortez Cranfill will officiate. Memorials may be made to the National Parkinson Foundation, Perry Green Valley Nursing home or Perry Nursing home.