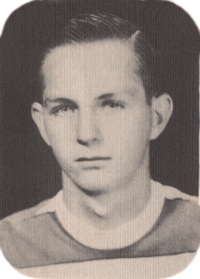 George was a family man who enjoyed a riotous game of Dominos or Fantan. He hated yard work and was the master of avoiding pushing a mower. George retired from the City and County of Denver, where he had improved the Christmas displays and lighting during his 20 year tenure. His favorite accomplishment was assembling the Reindeer and Santa’s sleigh. Being the avid jokester, he installed the antlers to the reindeer backwards, which went unnoticed for 5 years in a row. Overall, George worked as an electrician for close to 70 years, and thoroughly enjoyed retiring to the front porch, or watching football and old time T.V. sitcoms. Georges favorite show was Andy Griffith, and has a Barney Fife picture collection in his garage. He loved cheering for any team that played against the Broncos, and favored football games with Oklahoma University loosing to Oklahoma State University. That rivalry stemmed from his attendance at OSU to be an electrical engineer, and Donna’s selection to favor OU. George taught his daughters to dance by having them stand on his feet, where they danced to OU fight song Boomer Sooner.

When George retired, he took great pride in restoring a 1953 Chevy pickup truck to exactly the truck he had when he got married in 1955. George restored the truck to use to celebrate his 50th Wedding Anniversary with Donna. George and Donna had fun traveling the back country and farms, searching for the perfect truck to have for their Anniversary. He was very grateful to the men that helped him along the way, and the time spent with Mary during the restoration.

George was proud to have served his country as a Navy man, and a Veteran of the Korean War. He was Honorably Discharged, serving form 1948 to 1952, coming home to Oklahoma to work as an electrician with his Father’s family business, and volunteered on Perry Fire Department. George took a vacation in 1969 to Colorado, and enjoyed the beauty of the mountains so much that he relocated his family.

George was a very kind and generous man, a courageous and honorable man, who will be greatly missed. His battle with cancer has ended, may he have ever lasting peace.