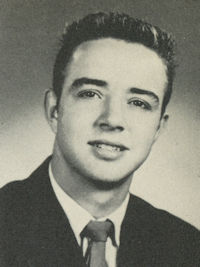 Mr. Layton was born on April 9, 1937, to Clinton and Ruby (Burnside) Layton in Pawnee, Oklahoma. He grew up and attended school in Perry, while in high school he was a wrestler.

Mr. Layton was in the Untied States Army and the Oklahoma National Guard.

Bob was engaged in the upholstery business and owned and operated Bob’s Custom Upholstery for over 47 years.

The highlight of Bob’s life was his family and spending time with his friends at the Sooners Corner or at Sooner Lake fishing.

He was preceded in death by his parents and two sisters: Mercine Hughes and Margaret Graham.