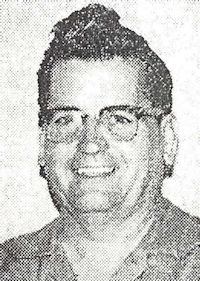 Willie M. Nelson, 61, 607 Jackson street, principal of Sumner school, was pronounced dead at 1:25 p.m. Sunday on arrival at Perry Memorial hospital, where he was taken by fire department ambulance. He became ill after working in the yard at his home.

Rosary will be at 7:30 p-m. Tuesday in Newton chapel and funeral mass is scheduled for 10 a-m. Wednesday in St. Rose of Lima Catholic church. Rev. Anthony Dockers will officiate and interment will be in the Catholic cemetery.

He attended Rose Hill grade school and graduated from Perry high school. He attended Central State college, Edmond, and received his bachelor of arts and masters degrees from Oklahoma State university. He was a member of St. Rose of Lima Catholic church.

Nelson’s record as a teacher and educator dates back to 1932, when he began a four-year teaching position at Oak Hill rural school. He taught from 1936-39 at Tearney rural school and from 1939-41 at Lucien school. He then taught a year at Sumner before entering military service in World war II. He served four years in the Air Force. He returned from the war to be appointed Noble county superintendent of schools from January, 1946 until August of that year. He accepted a teaching position at Orlando school in the fall of 1946. He was at Hayward school from 1954-56 and had been principal of Sumner school since 1964.

Survivors in addition to his wife of the home are two brothers, James Nelson, Perry, and LeRoy Nelson, Raulston.