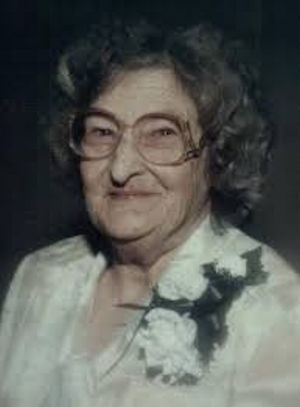 Grade school at Four-D, district 31, prepared Ruth Geraldine Rutherford for Perry high school, from which she will graduate this spring.

Ruth, 18 years old, is the daughter of G. W. Rutherford of route two, Perry. Her plans for the coming year are as yet not definite.

She was born in Perry and has lived in this county all of her 18 years.

Ruth Geraldine (Rutherford) Tasker, beloved 82 year-old wife, mother, grandmother, and child of God with an abundance of love for all she knew, died peacefully June 17, 2007.

She was preceded in death by her parents, George W. and Nora O. Rutherford; brothers, George N., Arch, Lee, John, Wilbur, Robert, and Ralph; sisters, Bonnie, Nora Magnolia, and Jesse; and son, Melvin Miner, a police officer who was killed in the line of duty in 1972.

She is survived by her husband of 44 years, Theo; brother and sister-in-law, Rufus and Ruby Rutherford of Perry, Oklahoma.; sister and brother-in-law, Reba and Rev. Bill Fish of Perry, Oklahoma.; sons, John and his wife Janice Miner of Pawnee, Okla., Fred and his wife Debbie Tasker of Northlake; daughters, Vickie Capers of Roanoke, Texas, Connie and her husband Don Johnson of Flower Mound, Texas and Linda and her husband David Schiefer of Duryea, PA.

She is also survived by her grandchildren, Corey Miner of Norman, Oklahoma, Todd and Beverly Miner of Pawnee, Okla., Melanie and Jerry Emmel of Flower Mound, Texas, Lori and Brent Boyd of Ponca City, Oklahoma., Neysa Johnson of Plano, Texas, Jason and Leora Tasker of Pearland,Texas, Zach and Chelsa Capers of Fort Worth, Texas, Stephanie and Joseph Reiter of Lewisville, Texas, and Robbin Capers of Tampa, Florida.

She was blessed with the joy of her great-grandchildren, Mason Tobe Emmel and Reese Lynn Emmel of Flower Mound, Texas, and Claire Layne Miner of Norman, Oklahoma.

She is also survived by numerous nieces and nephews, all of whom she loved. Her nephew, Reverend Lonnie Rutherford of Woodward, Oklahoma, will officiate at her services.

A celebration of her life will be held 2 p.m. Wednesday, June 20, 2007 at White’s Chapel of Memories in Weatherford, Texas. Burial will follow in the Tin Top Cemetery, also at Weatherford. Memorial donations may be made to Mercy Hospice, 417 Oak Bend, Ste. 170, Lewisville, Texas 75067.