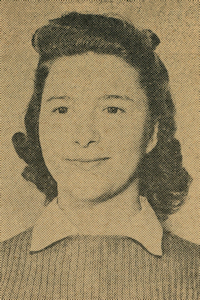 She has been secretary-treasurer of her home room during the past year, president of the mixed chorus and was a member of the student council during her freshman, sophomore and junior years. She also is a member of the girls’ trio, the Order of Rainbow and the high school band.

Virginia Lee appeared in both the junior and senior plays, and keeps a scrap book as her favorite hobby. She has a three-year band letter, was football queen during her junior year, and was May queen in the seventh grade. She was named to the all-state band and received an honor for her work in the student council last year.

Virginia Lee expects to attend college next year, but has not definitely made up her mind which school she will attend.

Known to all as “Ginny,” she is survived by her husband, Harley Clark. Both have been long-time residents of Hendersonville.

She is also survived by her son, Kevin Clark and his wife, Heidi Sawyer-Clark of Chapel Hill, North Carolina; her daughter, Pamela Clark of Davidson, North Carolina, and granddaughter, Taylor Parker.

Ginny was a long-time volunteer at the United Methodist Church of Hendersonville, a devoted member of the Women’s Circle, and enjoyed reading novels. Ginny and Harley were high school sweethearts from Perry, Oklahoma, who married during WWII, and moved to Hendersonville from New Canaan, Connecticut, after Harley’s 35-year career with IBM.

During the past two years Ginny received two prayer quilts from her Methodist Church friends. She also received an award from the congregation of the Methodist Church for her continuous service in producing The Word church service bulletin.

In lieu of flowers, the family requests donations to either the Choir Fund or the Memorial Fund of the First United Methodist Church of Hendersonville. Both Ginny and Harley have been actively involved in the Hendersonville Methodist church for over 30 years, and both were members of Methodist Church choirs in many communities over the past 70 years.

A memorial service will be held at 2 p.m. on Monday, October 3, 2011 at the First United Methodist Church of Hendersonville, with Rev. Dan Martin and Rev. Debra Gaddy officiating. The family will receive friends in the Barber Christian Life Center following, the memorial service.