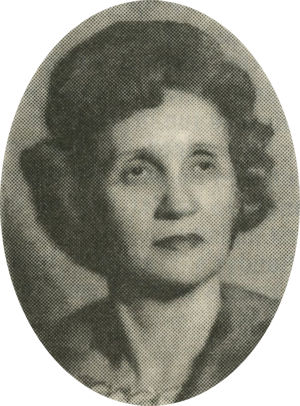 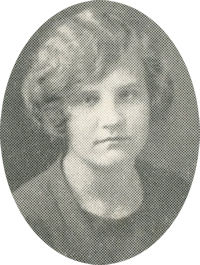 She was born November 17, 1909, on a farm in Noble County, northwest of Perry, Oklahoma and died Monday, April 21, 2003, at Via Christi Regional Medical Center in Ponca City.

Clara’s grandfather, Charles Stout, made the Cherokee Strip Run from Orlando, Oklahoma and staked a claim northwest of Perry. Charles later established the OK Filling Station in Perry at the southeast corner of Seventh Street and Fir Avenue and sold Shell Oil Company products.
Clara attended North Valley and West Lawn schools, northwest of Perry, and graduated from Perry High School, second in her class, in 1928. She and her cousin, Wilma Mackey, rented a room and stayed in Perry during her high school years.

On June 3, 1928, she married Albert John Schilling, from Halstead, Kansas. They were married at the Garfield County Courthouse in Enid, Oklahoma. Albert worked for Sinclair Oil Company and they lived in Shidler, Marshall and Oklahoma City, Oklahoma. While working in Oklahoma City, Albert was severely burned in an explosion while loading a rail tank car. After his recovery, he and Clara established a farming operation in Garfield and Noble Counties.

Clara and her husband were active members of Antelope Valley Church of the Brethren, where she served as pianist and teacher and was active in the Church Women’s Group. She was a member of a Home Demonstration Club and also accompanied and sang with her husband, Albert, and son, Clifford, as they sang at various church, school and community programs.

When Albert died in 1958, Clara moved to Perry, Oklahoma, where she was employed as a Nurse’s Aide at Perry Memorial Hospital. She was a member of the First Christian Church while in Perry and also was a member of the Perry Progress Club and the Order of the Eastern Star, serving as Worthy Matron.

While in Perry, Clara traveled extensively with a Christian Church sponsored travel group. Over the years, she traveled to 47 states.

Clara is remembered as always having a beautiful yard wherever she lived. She loved to collect rocks during her travels and used them extensively in her yard.

In 1996, she moved to Ponca City to be near her son and daughter-in-law. The last two years, she had resided at Shawn Manor Nursing Home.

In addition to her parents and husband, Albert, she was preceded in death by one sister, Verna Scarborough, and husbands Jim Wilson and Oval Rush.