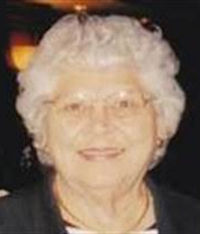 If the remaining few days of this school year pass with no slip-ups, Esther Albertine Schiewe will have completed four years with a perfect record – neither absent nor tardy to school.

Esther is a 17-year-old member of the 1943 graduating class. She is the daughter of Mr. and Mrs. Emil Schiewe of route one, Perry, and has attended local schools for the past four years.

Previous to entering PHS, Miss Schiewe had been a student at Pleasant Hill and Christ Lutheran grade schools. She was born near Stillwater, but has made her home near Perry for the past 16 years.

Esther was a member of the glee club in 1939-40, national honor society for last two years and is currently junior counselor for the Walther League. She is secretary-treasurer for the honor society and has worked as an assistant in the high school office for three years. Miss Schiewe is now employed in Kraemer’s store in Perry.

Esther Albertine Shelby, the youngest daughter of Emil and Albertine (Teske) Schiewe, was born April 26, 1926, near Stillwater, Okla., and passed away Monday, Sept. 30, 2013, in Enid, Okla.

She was baptized July 2, 1926, and confirmed in 1939. Her early schooling was at Pleasant Hill and Christ Lutheran. She graduated from Perry High School, class of 1943.

Esther received her associates degree at St. John’s College, and her bachelor of arts/elementary education from Southwestern in Winfield, Kan. In 1970, she earned her master of education at Central State College in Edmond.

While attending Southwestern, she met her future husband, Biddle Bellmont Shelby. They were married June 10, 1951. This union was blessed with three children, Irvin, Brad and Janet.

Esther was a devoted mother, best friend, confidant and adviser. She was a faithful wife, devoted daughter, supportive aunt and loving sister. She was the best grandma. She planned outings and summer vacations. She cooked favorite foods. She taught pie making and pumpkin carving.

Grandma Esther loved the challenge of Skipbo and dominoes. She drove miles for swimming lessons and state park adventures. She boasted of each grandchild’s accomplishments and was pleased to be included. She was given a queen’s name and measured up to the title.

Esther’s pupils are testaments of her teaching philosophy: love to learn. She prepared tirelessly for next day’s lessons and expected a child’s best. Singing, creative art and fun — the first and second graders at Marshall squishing in the VW bug — bring smiles yet today. She loved children and children loved her.

Letters from Esther were easily recognizable — her round primary printing on the envelope. She included things of interest — thought-provoking or just funny. She seldom forgot a birthday, and if able, appeared with her infamous angelfood cake. Her gift was encouragement, and her presence was always welcome.

In Woodward, she served as president of the Professional Business Women Association. She was a member of Zion Lutheran Church and Marshall Senior Citizens Center.

A gathering of friends and family will celebrate the life of Esther Shelby at 2 p.m. Saturday, Oct. 5, 2013, at Zion Lutheran Church. Cremation arrangements are by Anderson-Burris Funeral Home. Memorials may be made to Zion Lutheran Church, Fairmont.