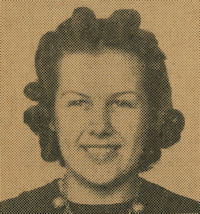 Next year Irene will go to Oklahoma City to take a secretarial course at Draughans’ Business College there.

﻿A graveside service for Irene Slaton, age 78, mother of a Perry man, will be at 3:30 p.m. Friday, June 22, 2001, at Memorial Park Cemetery with Rev. Glen Miller and Dr. Jerry Tucker officiating.

She attended Perry schools, graduating in 1940. On February 13, 1943, she married Vernon Charles Slaton, Jr. He was in the military, so they lived many places before returning to Oklahoma in 1964.

She worked at J.C. Penney’s in Enid for over 20 years. She was a member of Eastern Star, serving as secretary while in Puerto Rico. She was also the secretary of the Columbus, Ohio P.T.A, and an active member of The Golden Rule Club, and New Hope United Methodist Church. She enjoyed gardening, ceramics and especially spending time with her family.

She was preceded in death by her husband, Vernon; one brother, Karl Malzahn; and one sister, Mildred Ingram.