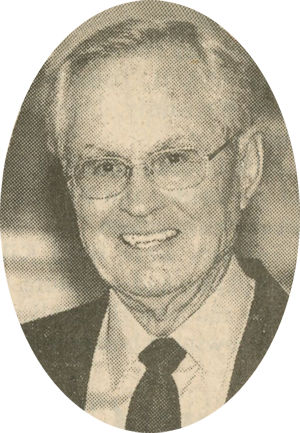 Planning to enroll at Oklahoma A. and M. college when he receives his diploma at PHS, Billy Smith is the 16-year-old son of Mr. and Mrs. R. A. Smith, 413, Ivanhoe.

He has lived in Perry 15 years and was born at Garber.

Billy went out for football and basketball briefly during his high school years, but most of his time out of classes has been spent as a Journal carrier-salesman and an employee of The Journal mechanical department.

Billy attended grade school at Lone Elm and in Perry.

He was a graduate of Perry High School and attended the University of Oklahoma and Oklahoma State University.

On September 5, 1981, he and the former Lila Johnson were married in Perry, Oklahoma.

Funeral services will be at 2:00 p.m. Friday, December 20, 2002, at the First Baptist Church in Perry. Rev. Buddy Hunt and Rev. Dewayne Finley will officiate. Interment will be in Grace Hill Cemetery. Memorial contributions may be made to the American Heart Association or the charity of the donor’s choice.