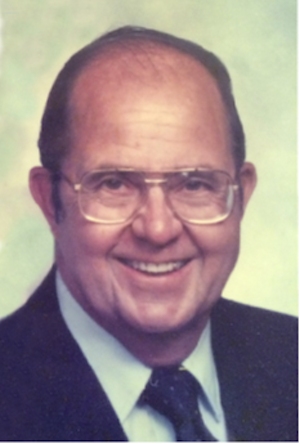 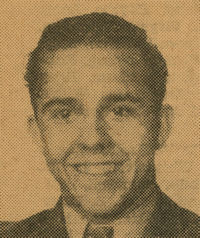 He played the position of halfback on the high school football team for three years, played forward on the basketball team for two years and went out for wrestling the last semester of 1936-37. He is also interested in horseshoe playing.

In 1939 he was sent to the Boys State as one of the outstanding boys of the school. He has been in the glee club for two years, taking part in two operettas and was a members of the boys’ trio and boys quartet for two years. He was also a member of the senior and junior play casts.

His hobbies are any kind of athletics and music.

Next year Harley plans to attend the University of Kansas in Lawrence, Kans., and take a course in either secretarial training or engineering.

If you have ever made a hotel or airline reservation, or observed a well-executed multi-level organization succession plan, your life has been touched by his pioneering work during his 35-year career with IBM.

Harley was married to Virginia Lee Magee known to all as “Ginny,” who died in September 2011 at the age of 88. Both were long-time residents of Hendersonville, North Carolina, after retiring and moving from New Canaan, Connecticut. Ginny and Harley were high school sweethearts that married during WWII. Harley was a Regimental Sargent Major in General Patton’s Regimental Service Company and received a Purple Heart before his honorable discharge in 1945.

He was the son of Sheridan Anthony Clark and Elsie Combs Clark from his hometown of Perry, Oklahoma. Harley and his sister Sybil spent early formative years during grade school living and calling home a converted railroad boxcar as an apartment provided the Santa Fe Railroad. His father, known as SA, was a track foreman for Santa Fe and building a second rail line between Chicago and Dallas. The one-room school houses that changed almost every other month as the track progressed allowed Harley to hear the lessons of all grades at once – and helped him skip two elementary school grades.

During his career with IBM Harley was part of the team that created the SABRE reservation system for American Airlines in Tulsa, Oklahoma – the first of its kind – and later was branch manager for the team that created HOLIDEX for Holiday Inn in Memphis, Tennessee, the first electronic hotel reservation system. These were the early system models for electronic transaction processing; the fundamental principles are still in use today.

He dedicated over a decade late career being part of the team that created the Executive Resources Program for IBM, essentially the company’s internal executive recruiting and placement function. As Director of Executive Resources for the Data Processing Division (DPD) and later the National Accounts Division, he led early identification of talent that included women, minorities, veterans, the disabled, amongst other categories considered for intentional talent cultivation. Several generation of IBM chairmen were identified by this program before Harley’s retirement, and the fact that the current global leader is female is a testament to the early work this program did to identify and nurture world-class talent and have remarkable people lead IBM from all walks of life. Many large enterprise organizations have studied and adopted IBM’s Executive Resources program as a model for multi-level succession planning and executive talent identification.

His family is celebrating, not mourning, a great father, faithful husband, professional pioneer and a superb friend.

Harley is survived by his son, Kevin Clark and his wife, Heidi Sawyer-Clark of Chapel Hill, North Carolina; his daughter, Pamela Clark, and granddaughter, Taylor Parker, both of Hendersonville, North Carolina.

Services will be held on Thursday, August 6 at 11 a.m. at the First United Methodist Church of Hendersonville, with the Rev. Mark Ralls officiating. The family will receive visitors in the Christian Life Center following the memorial service, a building, along with the columbarium and memory garden, Harley helped create.