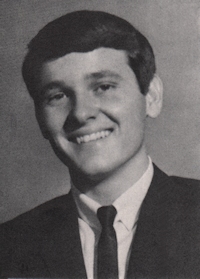 He served his country as a member of the United States Army, serving during the Vietnam War. James was a recipient of the Purple Heart, National Defense Service Medal, Marksmanship Badge (Rifle), Sharpshooter Badge (Rifle), Vietnam Service Medal and Vietnam Campaign Medal. He was a life member of the American Legion, VFW and DAV. James enjoyed going to his Vietnam reunions and assisted veterans with benefits.

James enjoyed fishing, hunting and raising hunting dogs. He worked closely with Oklahoma Fish and Wildlife. He loved his family, museums and traveling.

Funeral services will be 2:00 p.m. Monday, October 15, 2007 at the First Assembly of God Church. Pastor Brett Nation will officiate. Committal will be at Pawnee, Oklahoma. Memorials may be made to P.A.W.S. in care of Brown-Dugger Funeral Home, 1010 N. 7th Street, Perry, Oklahoma 73077.

He was preceded in death by one son, John David Reaves, his father, Warren Reaves and his paternal and maternal grandparents.