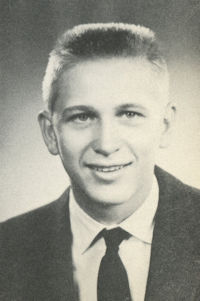 ﻿Elmer “Sonny” Rorabaugh, 63, of Perry, OK, was the son of Elmer and Constance Fern (Rains) Rorabaugh. He was born in Perry, Oklahoma on December 23, 1938, and died on Saturday, January 5, 2002, at his residence. The family has requested memorials to the Head Start Program or any local children’s fund.

Funeral services will be 2:00 p.m., Tuesday, January 8, 2002, at the First Baptist Church with the Rev. Buddy Hunt officiating. Interment will follow in Grace Hill Cemetery.

He was a 1957 graduate of Perry High School and was a member of the First Presbyterian Church. He married Kathryn Sue Fowler on May 30, 1958, in Perry.

Survivors include his two sons and daughters-in-law David and Sherry Rorabaugh, Danny and Carrie Rorabaugh, both of Perry, one sister Connie Hall of Drumright, four grandchildren, Woodrow LaVoyd Williams III and Trista Nanette Williams both of Fort Worth , TX, Alan McKay Rorabaugh and McKayla Noel Heath both of Perry, a very special friend Willa Dean Stover of Perry, two nieces Angela Rae Hall and Debra Dawn Hall both of Drumright.

His parents, wife, one daughter, Carrie Dawn Williams and one nephew Darrin Dwayne Hall preceded him in death.