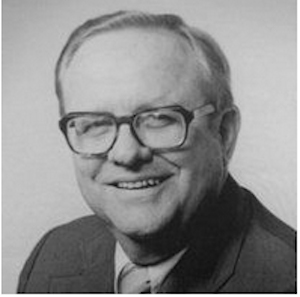 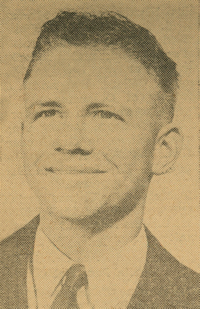 – age 16, son of Mr. and Mrs. Luther Sanders, was born December 2, 1924, in Perry, and attended St Joseph’s Academy here until his freshman year.

Bob is a member of the Letterman’s club, having played football for four years and basketball for two years. He lettered two years in football and one year in basketball, receiving a gold basketball and a silver football.

He plans to attend Northwestern State college, at Alva, next year.

Robert L. (Bob) Sanders, who went to eternal life on December 15, 2013, was one of the last of the Greatest Generation. His character and values were forged while growing up during the Great Depression in the Dust Bowl, and flying 23 WWII bombing missions as a B-24 Liberator nose gunner in the 15th Air Force. He was born and raised in humble rural surroundings in Perry, Oklahoma, where he met and married his sweetheart Laura Lee after the war. He graduated from Oklahoma State University on the GI Bill. Bob and Laura migrated to southern Louisiana, raising four children, and faithfully remaining married for 66 years. He worked for 35 years at Shell Oil Co., beginning his career as Plant Electrician and retiring as Senior Production Superintendent. After years of multiple company transfers, Bob and family eventually made their home in New Orleans.

Bob was a dedicated husband and selfless protector and provider for his family. He was a strong leader, problem solver, and wise sage. He taught his values to his children, including the importance of humility, loyalty, laughter, education, working hard, setting goals, and not believing anyone who says you can’t. Bob was a devout Roman Catholic. He will be fondly remembered.

Bob is preceded in death by his parents Luther and Rosa Sanders, brothers Raymond and Dan, and sister Pat.

Bob is survived by the love and strength of his life, Laura Lee Sanders, his four children Pam, Joe, David, and Patrick, his grandchildren Melissa, Chad, Emily, and Jonathan, great-granddaughter Addison, and loving in-laws.

The family has requested a private funeral mass. In lieu of flowers, please consider a donation to The Michael J. Fox Foundation for Parkinson’s Research at www.michaeljfox.org.