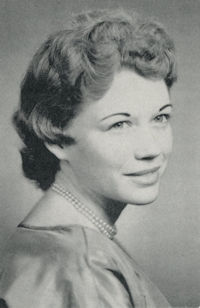 ﻿Shirley Ann Russell, 61, known by her neighbors as “the runner” because of her running for exercise in the neighborhood, died at her home in Thousand Oaks, CA. on Dec. 26, 1999.

Mrs. Russell was born Nov. 30, 1938, in Ripley, OK, the daughter of Ted and Pauline Patton. She was reared on farms between Stillwater and Perry, OK. She attended Perry High School and has relatives in this area.

She was married to Ken Russell in 1959 in Stillwater. She moved to Thousand Oaks in 1967 and had lived in the New Meadows area since 1968. She loved horses and riding. She enjoyed cooking gourmet meals, sewing, arts and crafts and was a capable hunter and a good shot. She enjoyed restoring furniture and antiques, and especially loved unusual, antique clocks. She loved gardening and plants and prized her rose garden. She raised her own spices for cooking, and vegetables.

She also managed the American Fidelity Building she and her husband owned in Pauls Valley, OK. She flew with her husband and helped maintain the airplane they have owned since 1975.

Her highest priority was to raise her two children and provide for a grandchild, Jesse, when his mother could not do so.

Graveside services for the family were held at 10 a.m. Wednesday, Dec. 29, 1999, at Conejo Mountain Mortuary in Camarillo, CA.