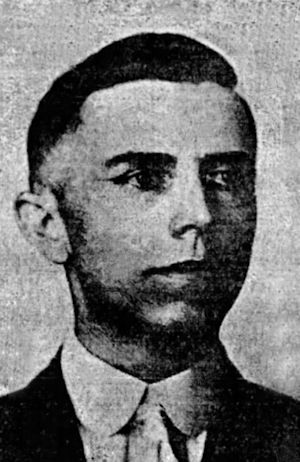 Born June 10, 1886, in Liberal, Kansas, he was the son of Stewart and Lillian May (Cummings) Alcorn. At the age of three he accompanied his parents in making the run into Oklahoma. The family settled at Guthrie. Four years later they moved to Pawnee. Later the family moved to Noble County, living in Perry and near Sumner where the family owned a farm.

He graduated from Perry high school in 1904. He received his Bachelor’s Degree from the Iowa State College and his L.L.D. Degree from the Michigan University at Ann Arbor, Michigan, in June, 1912.

Alcorn and Lucille Milford were married on October 23, 1915, at her parents’ home in Vinita, OK. They established their home in Muskogee, where he began his practice as the assistant prosecuting attorney of Muskogee County. In 1916 Alcorn was appointed Muskogee County judge, but served only briefly before being called to serve in the military at Camp Dodge, Iowa. Upon his discharge at the end of 1918, he and Mrs. Alcorn returned to Muskogee where he resumed his law practice.

For the last 10 years he has resided in Tulsa where he was law partner of W. E. Disney, first district congressman.

He is survived by his wife, Lucille, one son, Glenn Jr., and his mother, Mrs. Mae Alcorn, Tulsa.

Funeral services will be held in Tulsa Monday. Burial will be at the Greenhill Cemetery in Muskogee, OK.