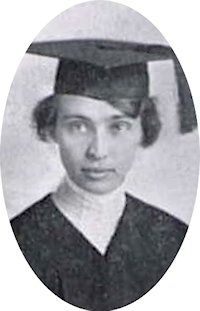 ﻿M. Zoe Wales, a Rancho Bernardo, California, resident, died June 21 at a local hospital. She was 99.

Born April 18, 1889, to Isaac and Mary Ann Minear Borrowdale, in Buchanan, Missouri, she came to Perry with her parents in 1898. Following her graduation from Perry high school in 1906 she continued her education at Oklahoma University in Norman.

She and Henry Basil Wales, assistant regional forester for the U.S. Forest Service, were married and lived in Prescott, AZ, Albuquerque, NM, and Shorewood, WI. Mr. Wales died in 1949. Zoe has spent the last 23 years in San Diego, California.

She is survived by her daughter, Sabra H. Wirth of San Diego; three grandchildren, four great-grandchildren and one great-great grandchild.

A graveside service will be at 9:30 a.m. Wednesday at Dearborn Memorial Park in Poway, CA, and a memorial service will follow at 10:30 a.m. at the Rancho Bernardo Community Church. The Rev. Richard D. Thompson will officiate.