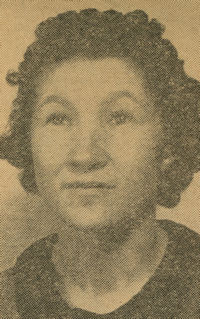 She attended the Lutheran school before coming to the Perry schools. She is a member of the Queen Esther society. For hobbies she has chosen reading, playing and tennis.

Alethea is undecided as to her plans after she graduates. She wants to be a nurse or librarian.

She was born May 6, 1922, in Ensign, Kansas, to Mr. and Mrs. John Hyram Clark. She came with her parents to Perry and graduated from Perry high school in 1941. During WWII she and a PHS classmate operated the telephone switchboard at Coyle, OK.

She was married to U. L. Smith.

Alethea was a longtime member of the Order of Eastern Star.