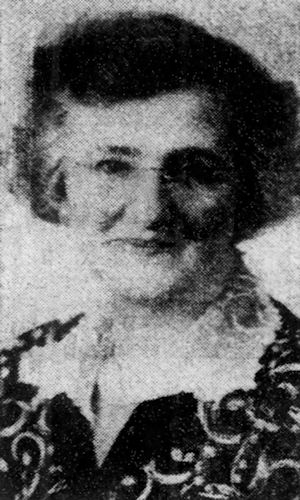 She was born October 13, 1889, in Indiana to William and Sarah Falls. Following her graduation from Perry high school in 1908 she attended Southwestern College in Winfield, Kansas, where she met Leroy David Nichols. After their respective graduations, they were married August 11, 1915, in Liberal, Kansas. They made their home in California where Mr. Nichols was superintendent of the Tulock schools. At the time of her death, Mr. Nichols was the Lodi Superintendent of Schools.

Mrs. Nichols was a member of the First Methodist Church and was noted for her regular attendance and for her leadership in the church’s organizations.

She served in various capacities for many years in the local Woman’s Society of Christian Service. She was on the local board of missions and taught in the local schools of World Friendship.

Mrs. Nichols was president for one term of the Central District Woman’s Society of Christian Service and for the past two years she was chairman of the Commission on Christian Social Relations and Local Church Activities in the California-Nevada Conference. As chairman she represented the northern California area at the Jurisdictional Conference of the Women’s Society of Christian Service. In the same organization she was also dean of the California Conference Training School of the College of the Pacific in Stockton in 1950.

Mrs. Nichols traveled widely and spoke at churches and at district meetings in the interests of women’s work in the church.

It would have been Mrs. Nichols’ wish that her friends, said her family, make contributions to a living memorial as she was a flower lover and a tireless worker for Christian living.

Contributions in her memory can be sent to the Lodi Memorial Hospital for maintenance of the flower garden there, or to Mrs. Adam Scheider, Rt. 4, Box 105, for the furtherance of a Christian way of life among women and children throughout the world. Gifts will be administered under the supervision of the Women’s Division of Christian Service of the Methodist Church.

Services will be held tomorrow at 2 p.m. from the chapel of Wells Funeral Home, the Rev. Edwin Sweet Officiating. The PEO Sisterhood will conduct services at Lodi Memorial Mausoleum where she will be entombed.