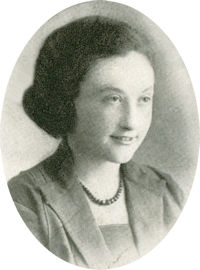 “Get her to do the Hula Hula for you.”

The daughter of Samuel S. and Elizabeth (Henn) Tate, she was born September 7, 1898, southwest of Perry, Oklahoma.

She graduated from Perry high school in 1921 and on May 31, 1923, she and Lester Raymond Snyder were married. They moved to New Mexico in 1927 where they engaged in farming. Mr. Snyder predeceased her in 1975.

Mrs. Snyder is buried alongside her husband, Lester, at the Mission Garden of Memories Cemetery, Clovis, New Mexico.