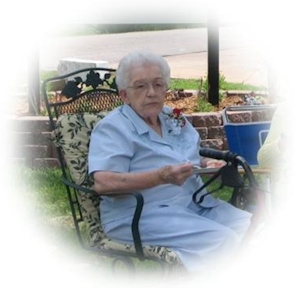 Doris Irene Waren, 96, of Perry, Oklahoma, was the daughter of Walker and Hattie Stout Robberson. She was born on May 2, 1916 in rural Billings, Oklahoma and died Tuesday, May 29, 2012 in Stillwater, Oklahoma.

She is a 1933 graduate of Perry High School and attended Oklahoma AM College at Stillwater, Oklahoma.

Doris loved her family and friends and enjoyed watching sports of all kinds. She was a member of the First Christian Church of Perry for more than 55 years.

Her celebration of life will be 10:00 a.m., Friday, June 1, 2012 at the First Christian Church, Perry, Oklahoma. Rev. Martin Foster will officiate. Interment will be at Grace Hill Cemetery. Services are under the direction of BrownDugger Funeral Home.

She was preceded in death by her husband Ray T. Waren, her parents, Walker and Hattie Robberson granddaughter in law, Mindy Waren.