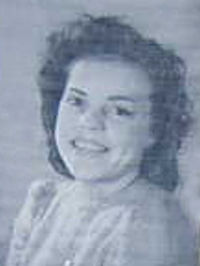 After graduation at Perry high school this spring, Mrs. Betty Beatrice Pricer has decided to join her husband, Pvt, Kyle Austin Pricer, wherever he is stationed.

He is now at Drew Field, near Tampa, Fla., and has been in service for five months. Mrs. Pricer’s brother, A-c Robert M. Berger is stationed at Eagle Pass, Texas, with the army air corps.

Betty, the daughter of Mr. and Mrs. Jim Berger of 124 Holly, was born in Perry 18 years ago but attended schools in Boise City, Okla., and Portland, Ore., in addition to the local system.

On May 8, 1954, she and William LeRoy Folan were married in Stanford Co., Texas, and have made their home in Alamogordo, New Mexico.

Survivors include her husband, Bill; her son, Jim Folan; and her daughters, Betty Gene Smith and Billee Lee Moore.

Memorial service will be at 7 p.m. today in Hamilton Funeral Chapel.