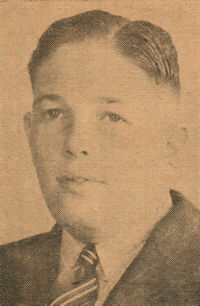 – won a silver football award and played in the high school band for seven years. He likes music, first, last and best. He will attend the University Preparatory College at Tonkawa. He is a native of Perry and has attended Perry schools all his life.

Born November 1, 1922, in Perry, Oklahoma, he was the son of Robert and Lenore (Stout) Hartman. He graduated from Perry high school in 1939.

Services will be Thurs., Sept. 11, 2 p.m. from the Zion Lutheran Church, Ferguson, with burial at the Memorial Park Cemetery, Jennings, Missouri.