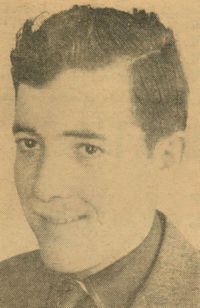 ﻿- son of Mr. and Mrs. W. H. Haughawout, of 1001 Delaware, will graduate this spring with outstanding activities in the school band and operettas on his record. He has gone to school in Ponca City and in Perry. He was born in Ponca City in 1920. During his term in highschool he has worked in the Perry Bowling parlor.

Clifford intends to go to 0. M. A. at Claremore and go into the U. S. Army after two years study there.

He was born to William Henry and Verta Mae (McKenney) Haughawout on August 26, 1920, in Ponca City, Oklahoma. He graduated from Perry High School in 1939.

During World War II he served as a sergeant in the army 71st Fighter Squad 1st Ftr Gp A.C. and was discharged in June, 1947.

Burial will be at the Fort Rosecrans National Cemetery, San Diego, California.