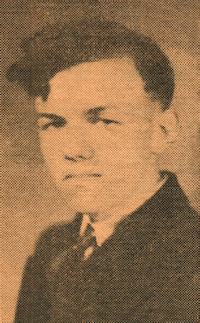 – son of Mr. and Mrs. R. W. Wilson of Perry, was born in Perry on June 15, 1920 and attended the elementary grades in Perry and attended high school in Perry. During his high school career he was in the Art Club.

Following graduation he expects to work a year and then attend college.

Born on June 15, 1920, in Perry, Oklahoma, to Robert William and Ruth Elizabeth (Brengle) Wilson. He graduated from Perry high school in 1937.

Charles received his bachelor’s degree, in chemical engineering, from Oklahoma State University and his master’s degree, in petroleum engineering, from Tulsa University. He worked as a chemical engineer for Exxon for 40 years and for USGS for 15 years. The Department of Interior recognized him for his work with the United States Geological Survey in Alaska.

Memorial services will be held in Perry, Oklahoma at a later date. In lieu of flowers, contributions may be made to the Oklahoma State University, Ms. Daisy Fund.