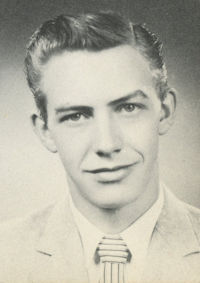 Funeral services will be held at 10 a.m. Wednesday, September 22, 1999, at the First Christian Church in Perry. Rev. Lynn Scott will officiate. Interment will be in the Fairview Cemetery, seven miles south of Perry, under the direction of Brown-Sisson Funeral Home in Perry.

Payne was a salesman for Rainbow Bread in Blackwell until 1965. He was then employed by Mid-Continent Permanent. He retired in 1998.

His family remembers him as a devoted father, grandfather, a faithful brother and friend to all. He was a member of the Elks Lodge.

Payne was preceded in death by his parents and two brothers, Carl and Lawrence Payne.